When it comes to your RRSP, do it with style

BY DALE JACKSON – There’s no need to get all gussied up when you make your RRSP contribution this year. However, you might consider adding some style to your portfolio. There are seven basic investing styles that fund managers either swear by, or mix and match. Employing the right style or combination of styles could make a world of difference when it comes to making a profit.

The most divergent investment styles are passive versus active. A passive investor feels simply investing in an index or several indexes through exchange-traded funds (ETFs) will produce superior returns over the long haul. A recent study by Standard & Poor’s found the majority of mutual funds underperform their benchmark indexes. If that’s the case, active fund holders are paying a portion of their investment in fees to a manager who isn’t necessary.

“[Active fund managers] have to outperform the index just to break even for the investor,” says Som Seif, president and chief executive officer of Claymore Investments Inc. Claymore administers a series of ETFs.

Jonathan Wellum, chief investment officer and CEO at AIC Investment Services disagrees. He believes good active fund managers can outperform the index in the long term. He also stresses the advantage of having an experienced manager with solid research to steer clear of the sort of market bubbles seen in the technology runup of 1999. “You’re really at the whim of a few sectors that could be overvalued,” he says.

According to the Standard & Poor’s definition, growth investors look for companies they believe will increase average earnings by 15 to 25 per cent. Growth stocks tend to have relatively higher prices compared with their earnings per share — known as multiples — because the market anticipates higher profits in the future. As a result they tend to be more risky and the potential for higher returns is greater.

Growth stocks are often associated with the technology sector in the late 1990s. Great earnings expectations led markets to drive prices to multiples in the hundreds, and when the market realized those earnings increases were unattainable, the bubble burst.

Value investors on the other hand, tend to look for hidden bargains not yet discovered by the market, such as cyclical stocks that are at the low end of their business cycles. A value investor rates a stock on fundamentals such as assets and earnings. Unlike growth stocks, value stocks trade at low multiples because their prices are low compared with their earnings.

Irwin Michael is a die-hard value investor — in fact he considers himself a “deep value” investor. He manages a $1.5-billion portfolio for ABC Funds that includes the ABC Dirt-Cheap Stock Fund.

“We try to buy a toonie for a loonie,” he says. Ideally, he likes to find companies trading below their book and breakup value. Stocks in his portfolio include Canadian Forester, Norbord Inc. and U.S.-based American National Insurance Co.

“I believe that in the long run, deep value will outperform everything else,” he says.

On the downside, it often takes a long time for the market to realize a beaten-down stock is undervalued. “That’s how you make the big money, by being patient,” Mr. Michael says.

After the technology crash of 2000, growth investing went underground along with growth fund performance. In the late 1990s, science and technology was the growth sector of the day and the Nasdaq was the benchmark. From 1995 to 2000, the Nasdaq composite index skyrocketed to more than 5,000 from 1,000 and investors got rich — quick. By 2001 it plunged below 2,000 and they got poor — even quicker.

“There will always be bubbles,” says growth fund manager Robert Floyd. He says today’s growth sectors are base metals and gold because stock prices have risen drastically, earnings are solid, and there’s plenty of room for earnings growth. One area where he says a bubble could be forming is uranium, which has risen in price by 400 per cent in just over three years.

However, the big difference between technology stocks at the turn of the century and technology stocks now is their smaller price-to-earnings multiples. The Nasdaq is still stretching to get to 2,500 and, judging by the latest batch of earnings, tech sector multiples are pretty tame. In other words, growth stocks are looking a lot like value stocks.

“The line between growth and value tends to get blurred,” Mr. Floyd says. As a result many growth investors like him have adopted a new style termed growth at a reasonable price or GARP.

The Floyd Growth Fund has been taking it on the chin, posting an average annual gain of 5 per cent over the past five years, compared with a 10.4-per-cent return for the average Canadian equity fund. However, the growth style has been paying off for Mr. Floyd over the past three months with a 13-per-cent return, compared with a 6.3-per-cent advance for the average Canadian equity fund.

Two other investing styles often cross over the growth-value line: bottom-up versus top-down.

A bottom-up investor begins evaluating an investment by looking at the individual company’s fundamentals: The reason that a good company is a good company regardless of the performance of the overall sector or even the economy. If this sounds like a value investor it’s because value investors are bottom-up investors. Then again, virtually every style of investment ends with a bottom-up analysis before a trade is executed.

A top-down investor looks first at economic and market factors, and then selects sectors that could thrive in that environment. They will begin selecting stocks only after that criterion is met.

Many top-down investors employ an investment style referred to as asset allocation. Asset allocation fund managers attempt to time the markets and move in and out of specific sectors and asset classes based on their own projections.

One fund that manages to utilize every basic active management style is the AGF Canadian Balanced Fund. Portfolio manager Christine Hughes allocates more than $1.4-billion in assets from top-down investing in what she considers growth sectors and asset classes. From there she takes a bottom-up approach to identify the best stocks.

With a background in economics Ms. Hughes says she first looks for “macro trends.”

“I study money flows, government finances, currency and interest rate trends — and many other things,” she says. From there she zeroes in on sectors with investment potential.

Currently she believes the transport sector has growth potential — specifically train transport. “It was a top-down decision to get into railways,” she says.

Once Ms. Hughes identified the transport sector and railways, she took a bottom-up approach and determined Canadian National Railway was a better value than rival Canadian Pacific Railway.

“It’s all about management,” she says.

The AGF Balanced Fund has managed to keep par with the average Canadian income balanced fund over the past 15 years but has outperformed over the past three years, posting an average annual return of 11.4 per cent. As complicated as the investment style may be Ms. Hughes adheres to the keep-it-simple principle. “I want to buy stuff that goes up.”

Dale Jackson is a producer at Report on Business Television. 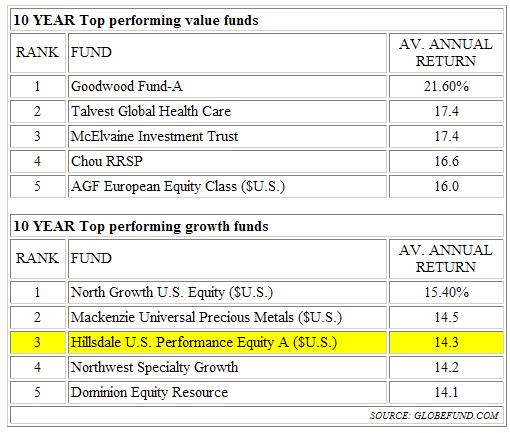 Published By
Globe and Mail

Previous Post The Standing Senate Committee on Banking, Trade and Commerce in the Matter of Hedge Fund Regulation
Next Post Trading’s evolutionary EPOCH