It was in late May when Trot Insider featured a story about a group of eight youngsters from west of Toronto that were making significant strides in the field of equine hydration. The ‘E-Bots Hydrators’ team had won multiple competitions and was headed to a very exclusive world competition in Washington, DC, which Trot Insider has learned they won.

The E-Bots Hydrators have designed a watering post dubbed the ‘H2O Post, Horses Hydrating Outside.’ The post hydrates multiple horses at one watering source. The post also records when and what amount each horse is drinking. Hydration information is key to indicating equine wellness. The team has received a provisional patent for its idea, which also includes real-time smartphone monitoring of multiple horses’ hydration levels.

The FIRST LEGO League’s Global Innovation Award competition took place in Washington during an exciting two and a half-day period in late June. The E-Bots Hydrators team officially presented its innovative idea to a panel of three judges, but additional judges also visited the booths of all the 20 finalist groups to ensure that all judges were completely up to speed with all of the finalists. When all was said and done, The E-Bots Hydrators team won the competition and the $20,000 grand prize that went along with it.

“It was definitely icing on the cake to be named the Global Innovation Award winners out of such an interesting and innovative group of students as the other 19 teams were,” E-Bots Hydrators Group Leader Pam Catricala told Trot Insider. “There were ingenious ideas that all had merit and teams had done exhausting research! It was clear that we were all winners as the top 19 teams out of 56,000 teams globally this season, and awesome that many teams will still pursue their products with help from the contacts they made through their season.”

The Hydrators plan is to build a working prototype and start testing it at the local stable in Campbellville, Ont. that has been so gracious in helping them with their season. They also have met many stables along the way that have offered to let the kids test their product, so the post comes with many supporters and many stable owners wanting to try it.

Catricala told Trot Insider that she is extremely proud of her team – Ashton, Andrew, Andrea, Graeme, Connor, Adi, Jason and Sheil – whom are currently enrolled anywhere between Grades 7 through 10 and are residents of Oakville, Mississauga and Burlington.

“I do think it is important to mention the learning they got,” said Catricala, “and the sponsors – E-Bots Robotics, Qualcomm, First Robotics Canada and Hillsdale Investment Management Inc. – because without them, kids wouldn’t have these opportunities.” 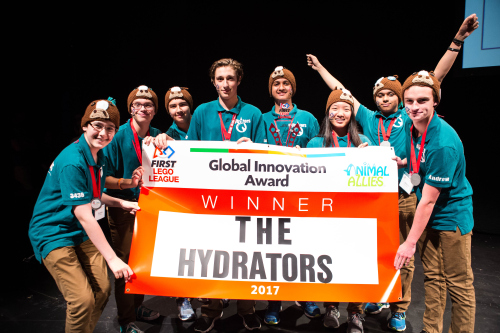 To read the full article, please refer to the link above.