WHAT ARE WE LOOKING FOR?

Many have taken a beating because of heavy exposure to hard-hit small-capitalization or commodity stocks, and not enough shorts in place.

This week, Lawrence Partners Fund suspended redemptions for 60 days. Managers of Epic Limited Partnership and Arrow Epic threw in the towel last month, and are winding their funds down.

We looked at the year-to-date returns until Oct. 31 of funds in the alternative strategy category in Globefund. We eliminated exchange-traded funds, other versions of the same fund (including those in U.S. dollars) and those with less than a one-year track record.

WHAT DID WE TURN UP?

Sextant Strategic Opportunities-A run by Otto Spork is at the top of the heap by a wide mile with an eye-popping return of 128 per cent.

What gives? Well, the folks at Sextant Capital Management Inc. are not saying. They were not returning phone calls or e-mails this week, and have been increasingly mum as its fund cranks out stellar off-the-chart returns in a market collapse.

After his fund shot up 74 per cent in July, Mr. Spork, a former dentist turned hedgie, has been reluctant to reveal how his commodities-focused strategy has been racking up spectacular returns. “We make our returns or business grow by having an edge that is not transparent,” he said then in an interview.

Jean François Tardif’s Sprott Opportunities Hedge LP, meanwhile, has broken even for the first 10 months. That’s no mean feat in this market where many funds have plunged 30 per cent or more. His fund only lost 1.1 per cent during the meltdown in October because he had boosted his cash and short positions.

“I turned increasingly bearish last year,” and have been shorting a diverse range of stocks, ranging from financials and retailers to manufacturers and commodity plays, said Mr. Tardif, who uses very limited leverage. “For a while, I was net short in October.”

Market-neutral hedge funds have also been weathering the storm well. Managers of these funds try to maintain a balance between long and short positions, and let their stock selection rule over time. 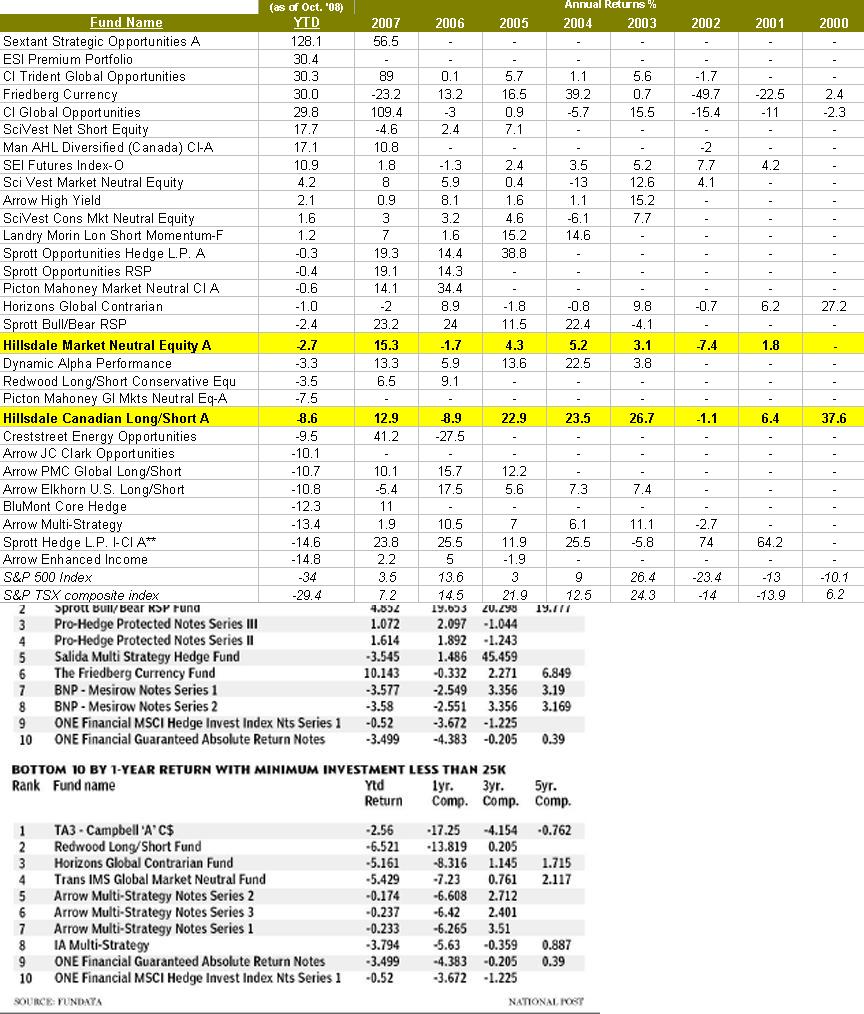 *SciVest Cons Mkt Neutral Equity fund will close at the end of the month.  **Sprott Hedge L.P. II – CI A, which is still open to investors, is off 4.4% year to date.

Published By
Globe and Mail